Below shows a sample diagram that presents a set of visualizations of the car dataset. 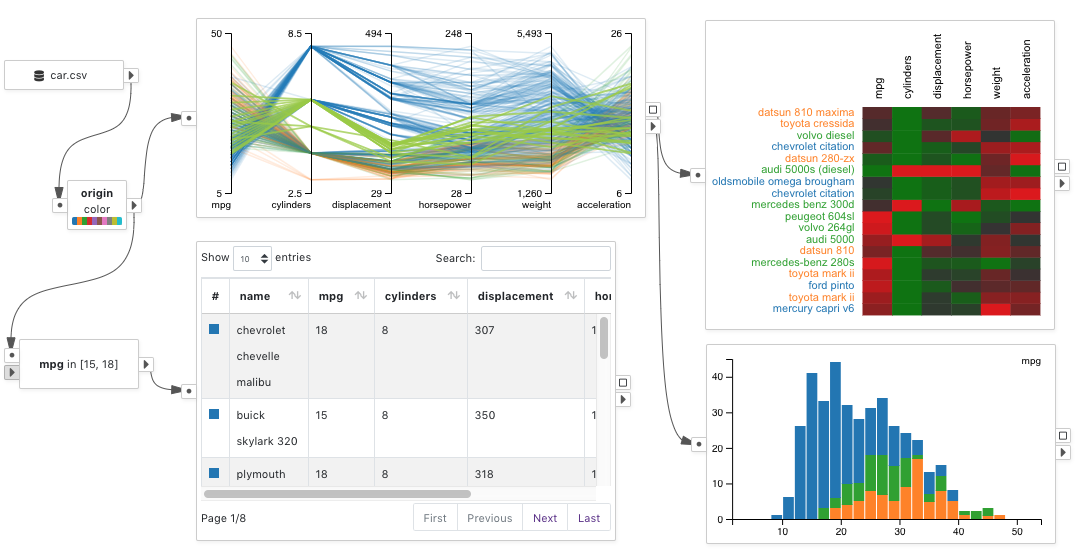 A node is a primitive component in VisFlow that performs one type of tasks. For example, a Data Source

loads a tabular dataset and a Scatterplot charts the data using 2D scatterplot. A node has input and output data that are transmitted via ports.

The connectivity of a port is either single or multile . A single port may be connected with at most one edge. A multiple port may have unlimited number of connections. All output ports are multiple ports.

If an output port produces interactive selection from a visualization, it is a Selection Port .

An edge defines how data are transmitted between nodes in VisFlow. Each edge connects two ports, and goes from an output port of the source node to an input port of the target node.

VisFlow employs a subset flow model for its dataflow diagrams. The attribute values and table columns of a data item cannot be changed within the flow, except that visual properties can be associated with a data item. For any data item from a subset, it always corresponds to one row from an input table.

A constant in VisFlow is defined to be one constant value that can be a number, a string, or a date. A list of constants can be transmitted between VisFlow nodes via edges connecting a pair of Constants Ports . Constants can either by manually specified by a user, or extracted from input tables.

Constants can be used to perform attribute filtering. For example, an Attribute Filter

may perform range filtering by accepting two constants that define the filtering range.

Constants may also be used as keys to relate heterogeneous tables. See linking for more details.

Each data item carries its own visual properties. These properties can be updated and modified by nodes in the dataflow. When two tables are merged by a Set Operator

, the visual properties of each data item are also merged.